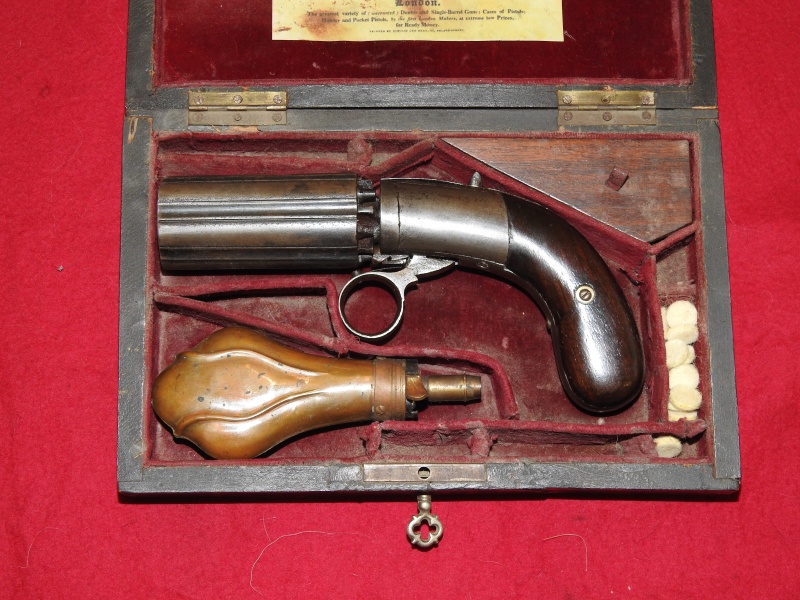 A cased Pepperbox of approximately 80 bore of .40". These Pepperboxes were the first widely available multi shot weapons. Variations had been successfully made with flint ignition but the invention of the percussion cap enabled the design to flourish. The early examples were hand rotated, and had an over hammer design. This later development had automatic rotation of the cylinder and an under hammer design which does not obscure the aim when being cocked. The pistol has no makers name but has Birmingham proof marks. The pistol does rotate and index automatically on cocking, but is not completely reliable in this. There is a sliding safety which locks the cylinder in place and prevents the hammer from cocking fully. The case has a reproduction label from Wilson's Gun and Pistol Warehouse in London. The small pistol flask is a reproduction and it is also worth noting the lead ball in the case is oversize, but none the less, adds to the appearance of the box. 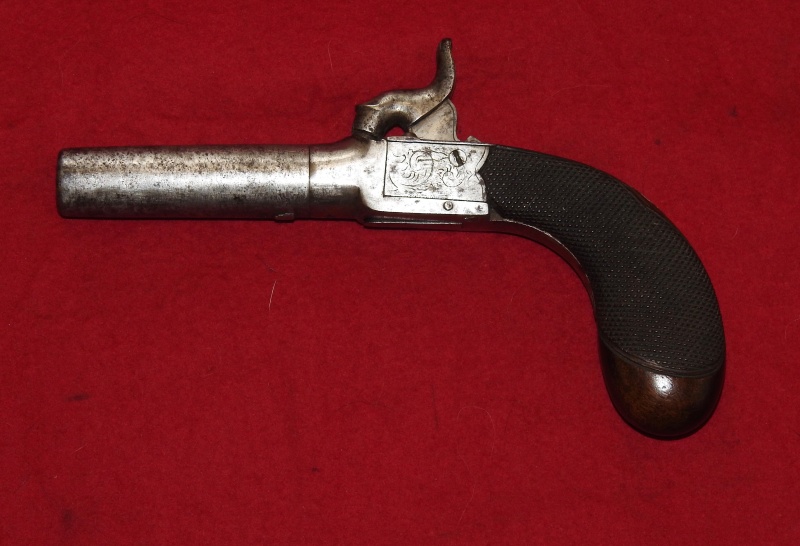 A good quality turn off pistol in 50 bore. These small pistols were easily concealed and were frquesntly carried for self defence. Firing a .45" ball at close range would certainly be effective. The turn off barrel is 2 1/2" long and turns freely. The hammer cocks and holds crisply at half and full cock. The drop down trigger functions correctly, with the trigger dropping down when the hammer is set at full cock. As well as looking very neat, this design gave a smooth, easier to carry, and easier to draw, shape. The grip is sharp chequering which is in remarkably good order and a vacant escutcheon. `it is without a makers, or more relevantly, a retailers name. Most pistols of this type were made by anonymous craftsmen in Birmingham and just engraved with retailers details. A rather better than average example of this type of pistol. 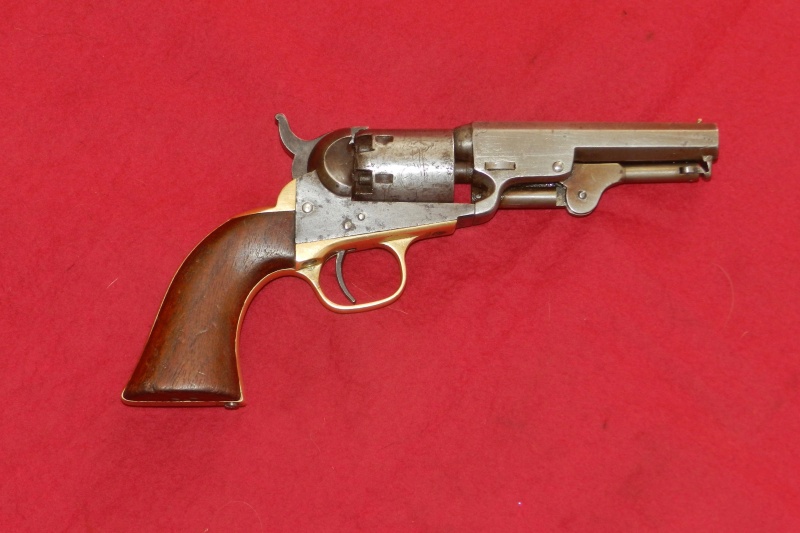 A Colt Model 1849 Pocket revolver. The 1849 Pocket was the replacement for the "Baby Dragoon" model and it became the best selling of all Colts percussion revolvers, being produced from 1849 through to 1873. This one has the serial number 275440 which dates it to 1865, the last year of the American Civil War. The serial numbers match throughout. The 4" octagonal barrel is engraved with "ADDRESS COL SAML COLT NEW YORK US AMERICA". It has a brass back strap and trigger guard and walnut grips. The cylinder is roller engraved with a Stage Coach hold up scene. The main spring is strong and the revolver indexes and cocks in a positive and crisp manner. These 5 shot .31" were popular for a number of reasons - reliable and affordable they were also far more convenient than the large revolvers, and a personal defence weapon is useless if it is not being carried when needed. They also saw extensive military service, often as a back up weapon, sometimes carried discretely. 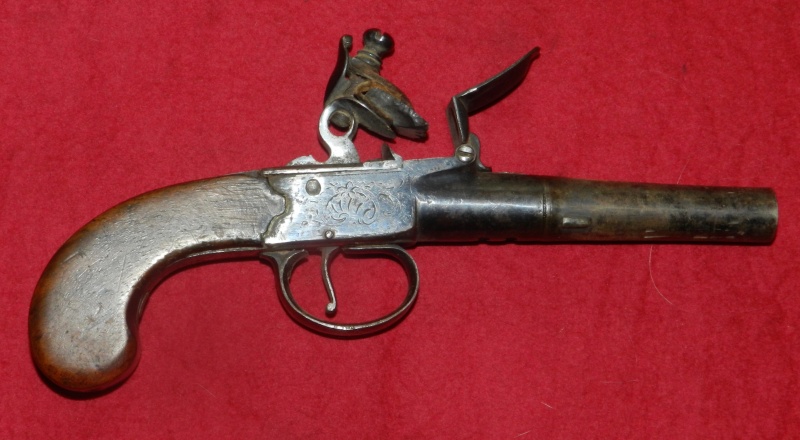 A 54 bore turn off flintlock pistol from around 1800. The pistol has a 2 1/2" barrel which turns off freely. The breech is stamped with two marks "PRO" and "VED" . The lock has no makers name. There is some pitting, and this is more prevalent on the left side of the lock. The spring is good and strong and the cock holds well at the half and full cock positions. 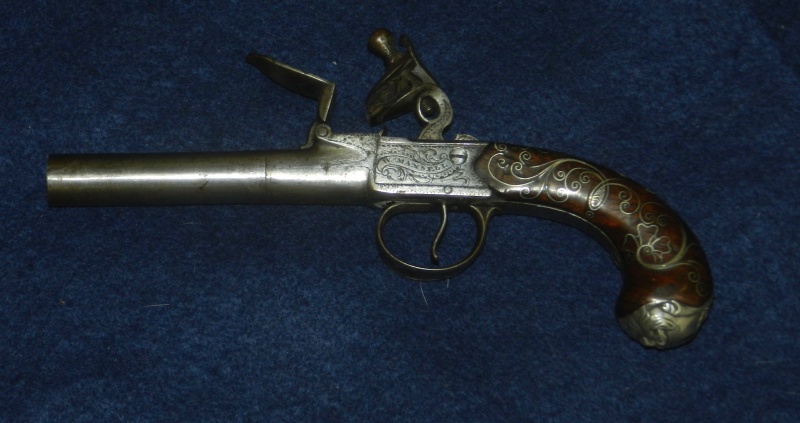 A 50 bore ( .45") flintlock pistol with barrel of just under 3". The over all length is 8 1/2". The pistol has the pre 1813 London proof marks, which were the first marks used by the London Proof House. This style of pistol with the central hammer and boxlock construction was first seen in the 17th century but became popular in the mid 18th century. The central hammer permits fewer parts than the side hammer design and also makes for a more compact pistol. The side of the lock is engraved with "W Mansell". My records to not show such a name at a suitable time, and it is quite likely that Mansell was a retailer rather then a maker of pistols, and had his name put on the pistol. This was common at the time, and indeed continues today with modern shotguns. The butt is inlayed with decorative silver wire - with some losses on the right side. The cap has a splendid grotesque mask which is in super condition. The spring is strong on both the cock and the frizzen - which sparks well. A very attractive, good quality pistol from the 1700s.

A large double barrelled percussion Howdah pistol by Westley Richards. This large and heavy pistol has 7 1/2" barrels and will take a .65" patched ball. It has an overall length of 14" and weighs 3lb 1oz. The term Howdah Pistol was given to pistols of this type after they became a favoured close range weapon while hunting in India. The Howdah being the covered saddle or box on top of an elephant. An injured tiger may well try and assault its elephant mounted attackers. A short barrelled weapon firing a large ball with a heavy charge was what was needed to repel such a powerful boarder. Some commentators suggest the massive double barrelled pistols were deliberately weighted to shoot down hill, but it is likely suspect the thick barrels made to take the heavy charge would achieve this anyway. A double dose of large calibre ball would lend itself to self defence against almost anything and pistols of this type were used by hunters and adventurers throughout the empire during the middle of the nineteenth century. Westley Richards is one of the best known and highly regarded names in the gun trade. The son of William Richards, Westley was born in 1814 who joined the family business of gun making, which had evolved from being silversmiths and cutlers. Westley had large taken the business over by 1840. The unexpected death of his wife shortly after their marriage affected Westley severely and he then dedicated himself solely to his work. He became and innovative and pioneering engineer and took out numerous important patents. The company still trades in Birmingham today. Large calibre double pistols do not often come up for sale. this one is a excellent mechanical order. the barrels are an attractive brown, but do have some external marks and pitting which is shown in the photos. The bores are good, bit not perfect. The lock plates are engraved with the name"Westley Richards" and foliate patterns. the captive swivel ram rod is present . There is a vacant white metal escutcheon on the butt, to the rear of the tang.

A handsome single barrel brass turn off percussion pistol. The .45" barrel is 4 1/2" long, which is longer than the usual self defence turn off pistols. The barrel, which turns freely, and the action are from brass. The action sides are engraved with "London". Usually, "London" without an address is a strong indicator that the gun was not made in London, but intended for retail there. In this case the pattern is confirmed with a Liege proof mark on the action. The plain wood grip is free from splits or losses, and the hammer cocks and holds at half and full cock correctly. 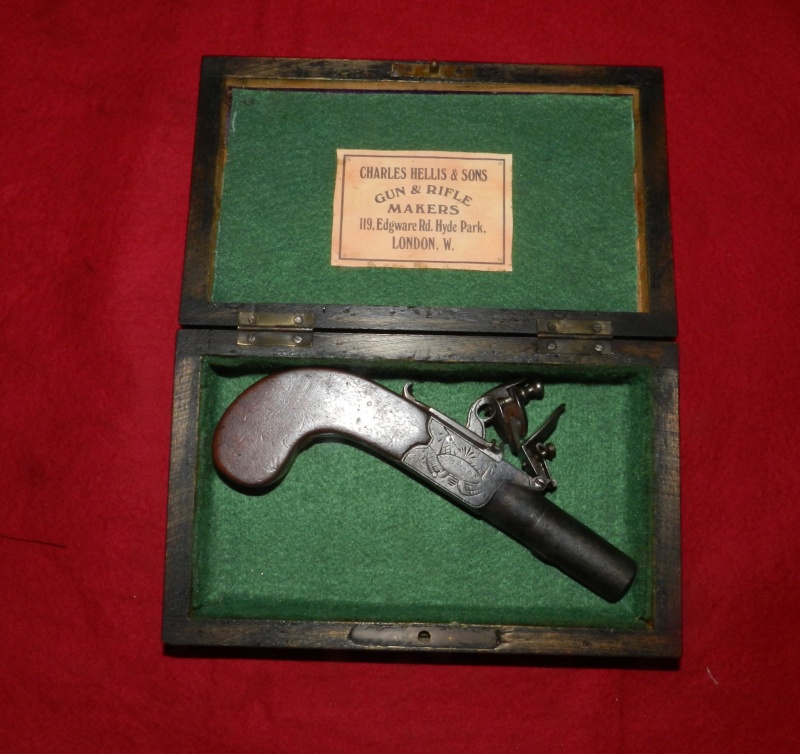 John Jones and Co are recorded as gun wholesalers at 116 Minories, London from 1826 to 1829. They were trading in Birmingham from 1811, and this ties in with the Birmingham proof marks on the pistol. One side of the lock is marked JNo Jones and Co, and the other London. The pistol has a aged patina and light pitting to the surface but is in proper working order. The turn off barrel is free and the drop down trigger is tight and crisp. The cock has a sliding safety which locks the frizzen in place - useful on what is a self defence weapon which would be carried loaded if it were to be of any use in an emergency. The box, although an old one, is not original - pistols of this type would not be likely to be sold cased. It does make an attractive way to display the pistol. The trade label of Issac Hollis is a reproduction, but looks the part anyway. 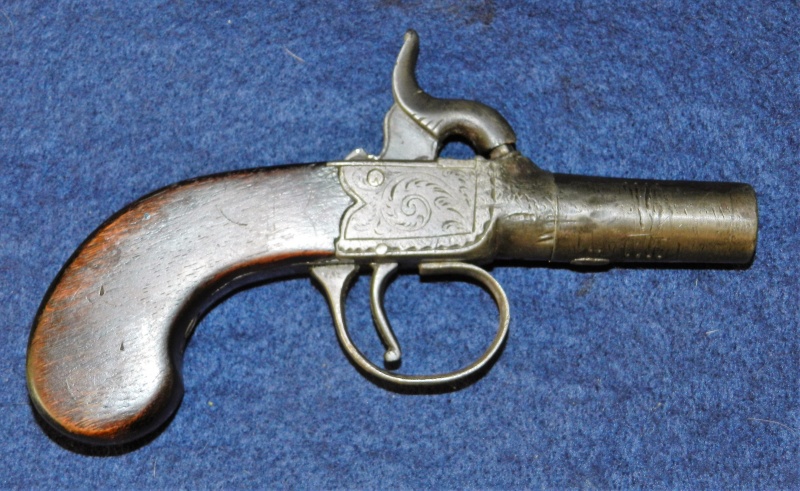 A classic mid 1800s percussion muff pistol. The bore is .500" which would make a very effective close range calibre. Designed as a self defence weapon intended to give the user an advantage over a knife or cudgel wielding assailant at close range. The turn off barrel is free and the action all works properly. The barrel is marked with Birmingham proof marks, but there is no name on the lock.

A continental copy of a Colt revolver. During the latter part of the 19th Century many continental factories were producing unlicenced copies of Colt revolvers. This one is styled on a Model 1862 Navy. It indexes, cock and holds as it should. All the nipples are present. An interesting display piece for the collector or renactor at a much reduced price when compared to an original Colt 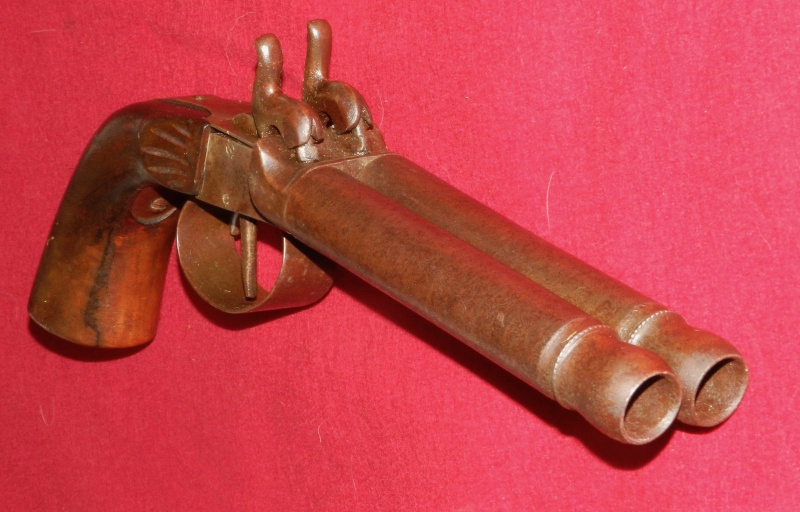 This is a large bore man-stopper self defence pistol. The locks and grip are quite plain but the .600" barrels are etched in a design reminisent of damascus twist. The 5" barrels have bell mouths. The overall length is 11". The barrels have German proof marks. A working pistol from the middle of the 19th century. 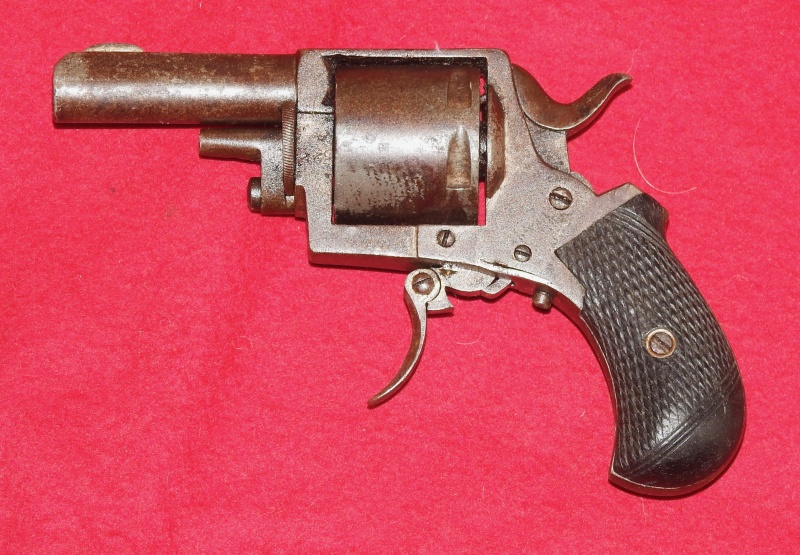 A British Bulldog revolver in the obsolete .320" calibre. Revolvers of this type were popular self defence weapons in the early part of the 20th century. They were often cheaply made and the design itself was much copied. The term British Bulldog was also popular on the American side of the Atlantic. This one has British Bulldog engraved on the top of the frame, over the 6 shot cylinder. It is most unlikely it was made in the UK! The revolver cocks, holds and indexes correctly, but the trigger does not return back to the unfired position. To make it cock again the folding trigger needs to be pushed forwards. It makes an interesting display piece or could have what is very likely a broken spring replaced. Cheap and cheerful.