All the firearms on this page will require either a Shotgun Certificate or a Firearms Certificate.

Older muzzle loading weapons may also be found on the Antiques and Obsolete Calibre page. 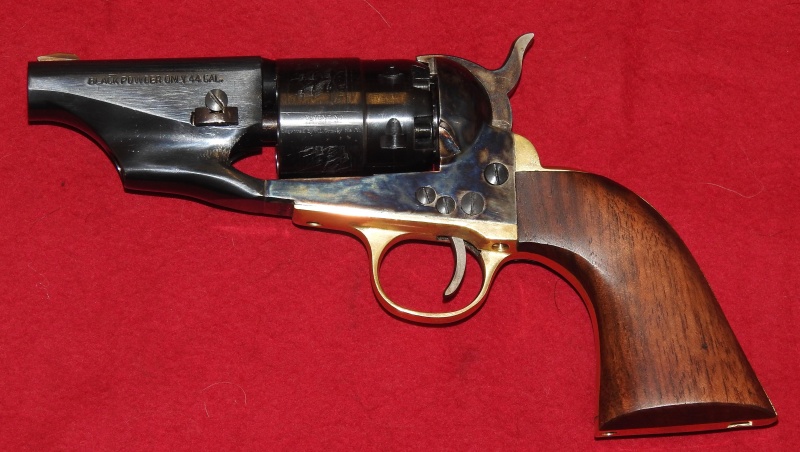 A faithful copy by Pietta of the Colt 1860 Army Sheriff Snubnose. Effectively ac cut down version of the Model 1860 Army the Snubnose is a rare pistol. Not one for the target shooter, the .44" barrel is a mere 3" long. Presumably cut down for ease of carrying and/or speed of drawing this pistol, with the heavy .44" load will spit flame and lead in equal measure. It is a real hoot to fire. It comes with the special brass loading rod, as the usual loading rod mechanism is not present on this model due to the shortened barrel. In very good overall condition, and in it's original box. All the original colouring is present and the pistol works perfectly. A few marks on either side of the retaining wedge are the only signed to say this pistol has been used. These pistols were also known as "Belly Guns" or as "Avenging Angels". This latter name is attributed to them being carried by the vigilante "Danite" gangs of Mormons and John Browning, father of the firearms genius John Moses Browning, was said to have carried one.

A Parker Hale Birmingham percussion reproduction of an Enfield 2 Band Pattern 1858 Navy Short rifle - but smooth bore. A faithful reproduction of a famous rifle, but with the smoothbore barrel to allow it to go on a section 2 shotgun certificate. This one is in exceptional condition - and may even be unfired.

A Ruger Old Army .45" Percussion revolver. This one is in stainless steel and comes in the original Ruger hard plastic case, and with the original factory instructions. A very well made revolver and a model which is widely regarded as the best percussion revolver for the serious shooter. It is not a specific replica of any historical model, but a well designed, high quality percussion firearm. 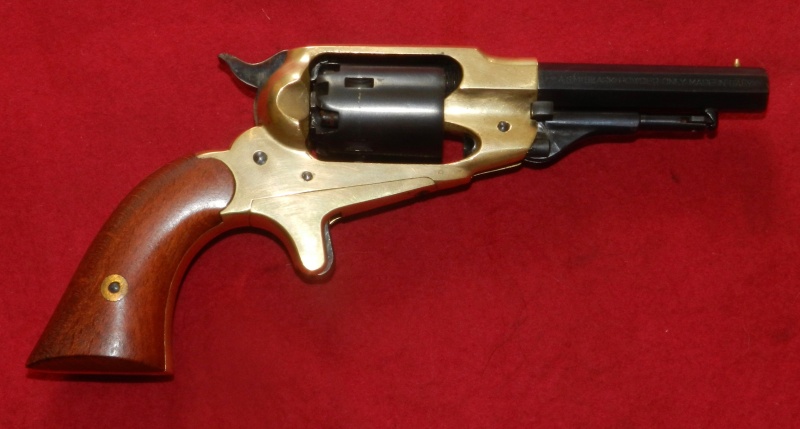 A very tidy Pietta remake of a Remington 1863 Pocket Revolver. Pietta offers these in a blued steel and in a brass model, and this is the brass version. All present and correct - used but straight and in good order. These little revolvers are great fun to shoot, and even the most restrictive FEO could not say you don't have room in your gun safe! 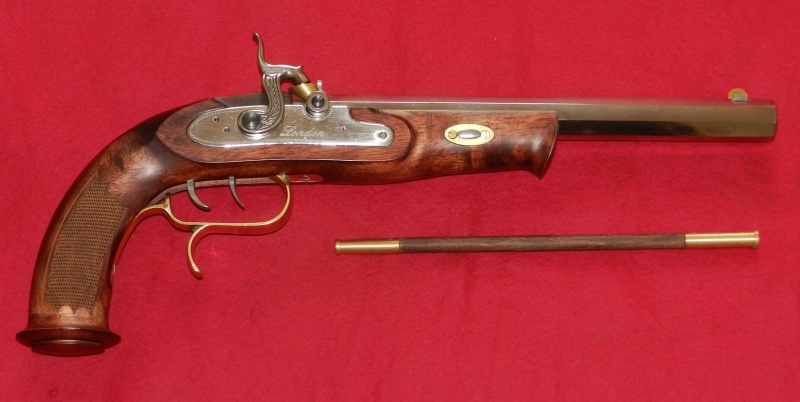 A recreation of a classic English percussion target pistol. In .45" calibre this William Parker pistol is is in excellent condition. The rifling is perfect and the nipple clean and straight. The previous owner tells me he did fire it, but such is its condition it could pass as being new. It comes in the original box and has the factory supplied loading rod. £100 cheaper than buying a new one.

A Beretta 12 bore o/u percussion muzzle loader. These were made to celebrate the 300th Anniversary of Beretta in 1980. These guns are a delight to use and tis one is in remarkable condition. There is little or nothing about it to suggest it has ever been fired. It even has the Beretta warranty in the original plastic slip. These do not come up very often anymore and are much prized by their owners. 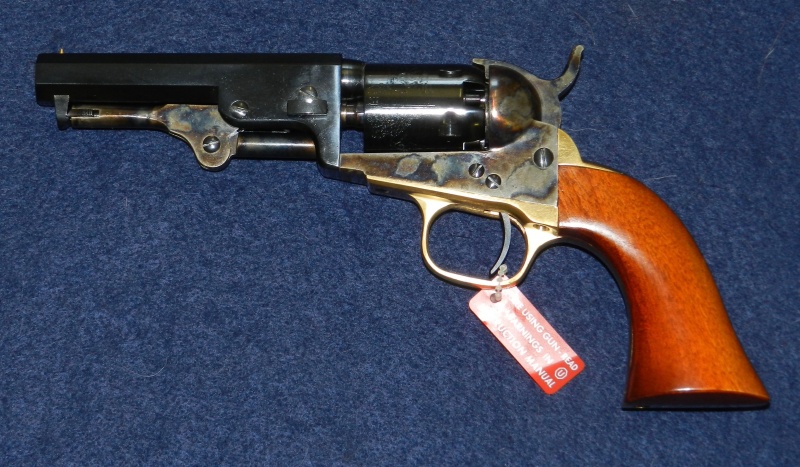 Uberti Colt 1849 Pocket .31". New and unfired, this pistol is still with its factory tag and has its factory grease on the metal work. The baby of the Colt range, but great fun to fire. List price for this is £292 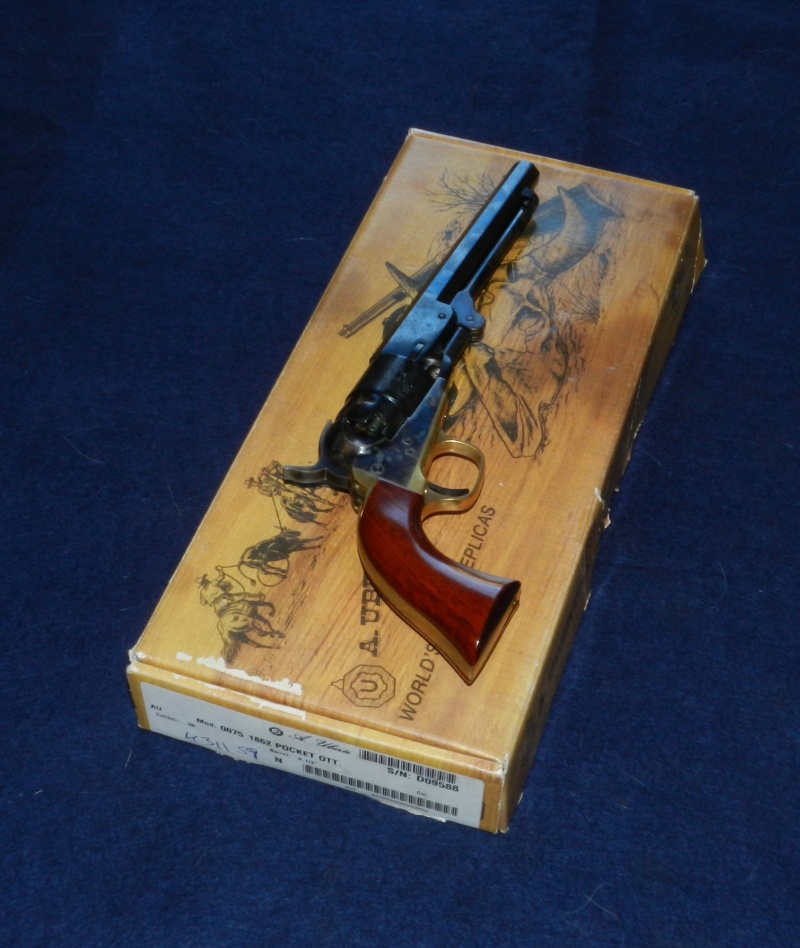 This very little used Uberti Colt has all it's colour hardening present and comes in it's original box. I suspect it has only been fired a handful of times, and was then properly cleaned. It is very good condition all round. New price is over £300

Uberti Colt 1862 Pocket Navy .36" 5 1/2" barrel. This pistol has been little used. Much of the cased colour hardening is present. The 5 shot cylinder is engraved with a stage coach scene. The new price is over £300

An Uberti Colt 1851 Navy .36". This faithful reproduction has much of the original colour hardening remaining on the frame. The trigger guard and back strap are in brass. The 6 shot cylinder is engraved with naval scenes. The new price is over £250

A 12 bore side by side 12 bore percussion shotgun by Navy Arms. A tidy example with the colour hardening finish still showing well on the engraved locks. The 28 1/2" barrels have good bores. The stock has a reach of just over 14 1/2". Great fun and just the job when it is just too wet to take the old Manton out!

A good quality rifle from Pedersoli. This Kentucky has a .45" rifled barrel and the rifling is in good condition. The full length stock is also in good shape - it has a few marks and minor scratched from normal use, but gives every indication of having been looked after by it's previous owner. The barrel is 35". It has brass furniture and a brass patch box. The brass fore sight is adjustable for windage. The wooden reloading rid appears to be the original one supplied. The new version of this rifle from Pedersoli is over £600.

A Kentucky Flintlock pistol in .45" calibre. This example is Spanish made and is in good condition. The 9 3/4" barrel is octagonal and both the front and rear sights are adjustable for windage. The rifled bore is clean and sharp. The lock has all the factory case hardened finish and it all works as it should. The frizzen sparks well and there is nothing to suggest the pistol has seen much use. Although termed "Kentucky" pistols, they were made all over the North America - in fact the most productive state was Pennsylvania and this because it was were the greater number of German and Dutch immigrants settled.

A good quality and well finished reproduction of the Brown Bess flintlock musket. Walnut stock, and brass furniture. 42" barrel and an overall length of 58". In good used condition and sparking well. These are over £1200 new.

A Pedersoli recreation of the flintlock pistol produced at Harpers Ferry in the early 1800s. This design was made, but not exclusively, for the US navy. It .58" calibre and gives a good spark and shoots reliably - as a Pedersoli should. It is in very good condition and a new one costing £375 would be indistinguishable from this one after a few shots. Harpers Ferry Armoury was torched by retreating Union troops in the American Civil War. Many towns folk apparently fought the blaze. The advancing Confederates removed most of the machinery to an area further from the front line and then destroyed what was left of the armoury.

The 2nd Generation Colts were made by Colt in the 1970s. They are the best shooting of all the Colts and are regarded experts, including Colt themselves, as being genuine Colts. The rough castings for the large components were ordered by Colt from Italy. The components were then machined, assembled and finished by Colt in their factory in Connecticut. The revolvers are stamped and engraved as per the originals; Address SamL Colt- New York US America on the barrel top and a stage coach scene on the cylinder. The bottom barrel flat has the proof marks from Birmingham. The Ubertis and other can work very well, but this revolver has a very different feel, and is clearly superior. They are rare guns in the UK.

A Harpers Ferry .58" smoothbore flintlock by Antonio Zoli. The bore is free from pits and marks and the browning on the barrel is all present and even. The stock is free from any significant marks or scuffs. A brass butt trap for keeping patches or spare flints is opened by a button on the top of the stock. The flintlock action gives a good strong spark. The barrel is 90cm. All good to go and the large .58" bore size will make a decent job of firing shot at clay pigeons as well as ball at targets. The smooth bore makes this a section 2 (shotgun certificate) gun.